I took the Seattle Light Rail from Seattle to the Sea-Tac airport fairly quickly with a temporary transfer at the Pioneer Station stop because they are linking up the Eastside Light Rail Route.

My Korea Air flight was comfortable and the staff very attentive and reminded me that foreign carriers like Korea Air always seem to me a better way to fly internationally.  I had ordered a vegetarian special meal and learned that I would be served among the first.

At the Incheon airport transfer, I stopped for a snack and this little girl was most curious.  Her father took a picture of us.  Notice that both she and her mother were wearing face masks because of the fears of the recent breakout of the Chronavirus started in Wuhan, China. 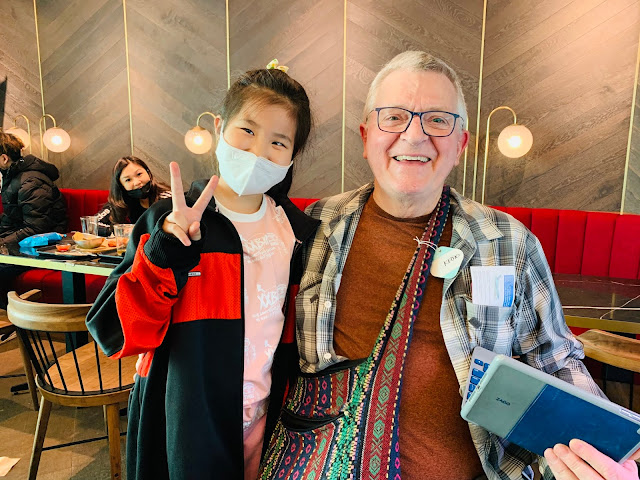 On the flight from Incheon to Bangkok it looked like about one out of ten people were wearing masks.

On arrival at the Bangkok, I was pleased to see that there was a fast line for people traveling with children and people like me over 70 years old.  I cleared customs, withdrew Thai Baht from the ATM and then rode the airport train to downtown Bangkok.

The weather here ranges from scattered clouds to clear and from 80 degrees to the 90s. Their rainy season doesn’t start until May.

The Skytrain linked up to the Chao Phraya ferry costing just 15 Baht for a beautiful ride up the river to the Chinatown stop at the Ratchawang Pier. 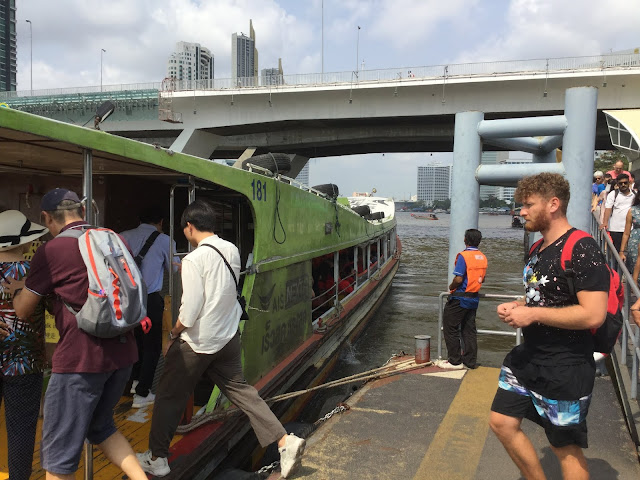 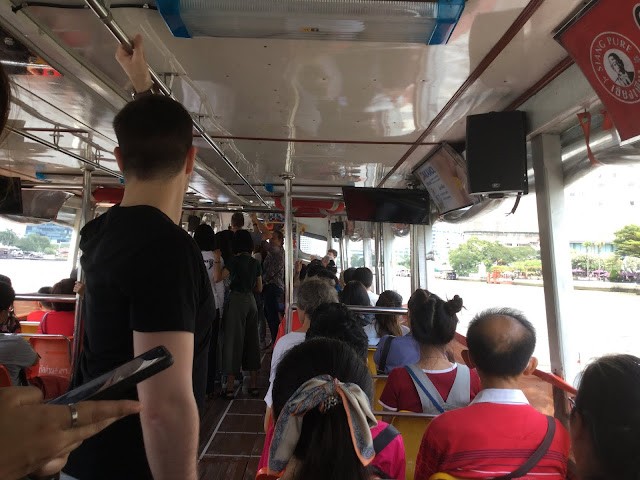 Over the weekend I went to Chinatown to see the Chinese New Year celebrations and they did not disappoint. The crowds were thick with people wearing red clothing and Chinese dresses.  For those that showed up without, there were many vendors selling racks and racks of red dresses and shirts. 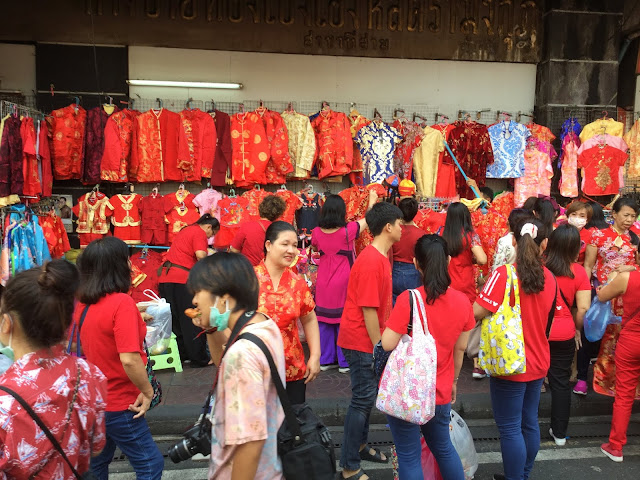 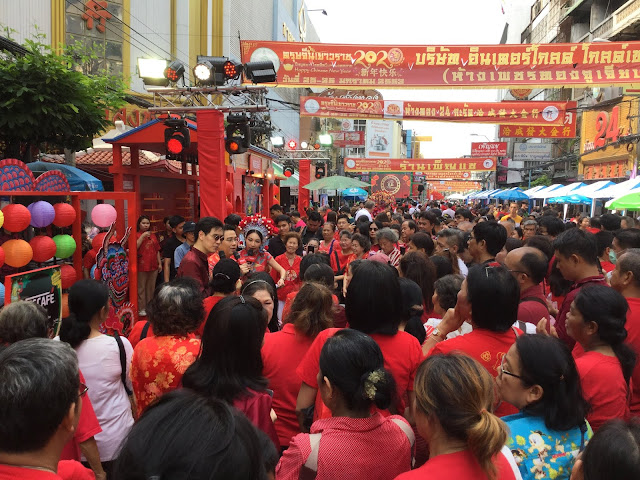 The Yaowarat Ave was the major event location from Ratchawang Ave to the Wat Trimit where the Golden Buddha was located.  All along the Yaowarat were hundreds of vendor stalls selling all imaginable items and foods.   I concentrated on having several beverages ranging from Mango smoothies to Thai Iced coffee. 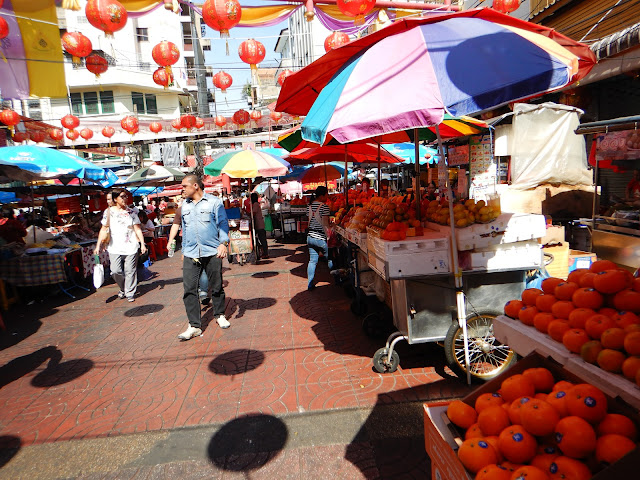 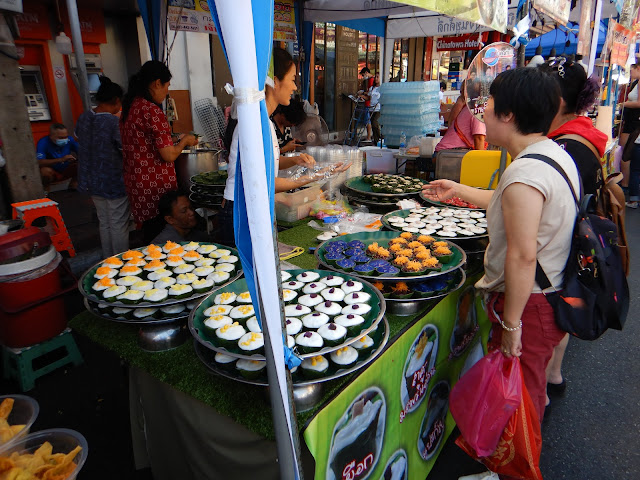 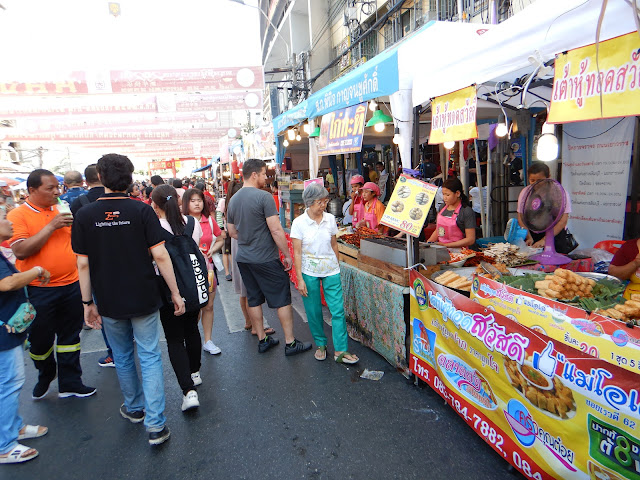 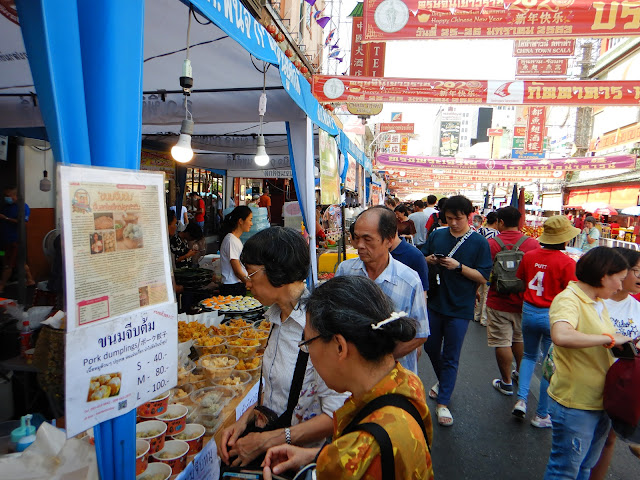 These lion dragons visited social clubs, temples, and various merchants to offer them good fortune for the upcoming Year of the Rat.

Even some of the companies sponsor lion dragons.  This one is the Suporn Food Company.

I noticed that it looked like there was going to be a parade at 7 pm and people began setting up all along the avenue.  I decided to wait out the time by first visiting the Golden Buddha at the Wat Trimit and then go for a street food dinner followed by a foot massage. 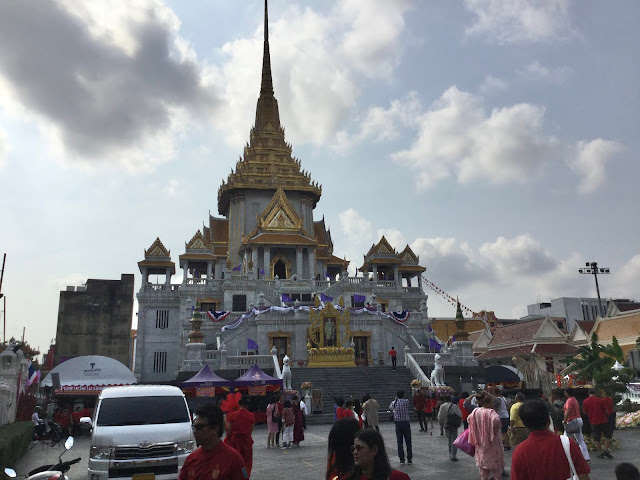 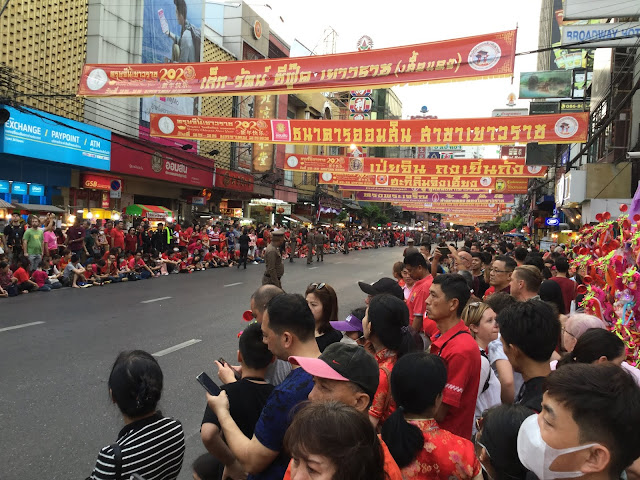 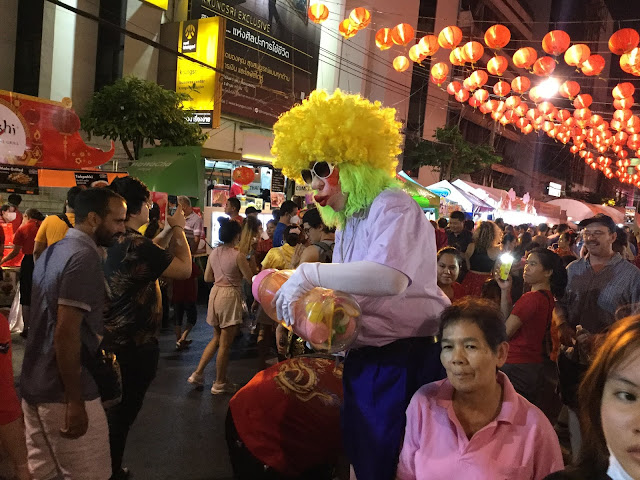 Here is where I stopped for some shrimp pad Thai and a mango smoothie before getting a foot massage. 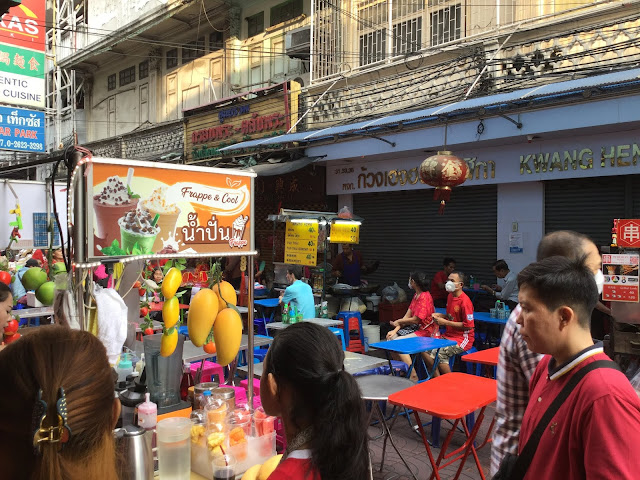 Many had been waiting for several hours when the parade finally started.  I had imagined that the parade would be filled with scores of lion dragons, fireworks, marching bands and dance groups, but instead it was only a few open air busses filled with VIPs and then it was over.  At least I only waited for an hour in thick crowds compared to some who had staked out their places in the parade route for several hours. 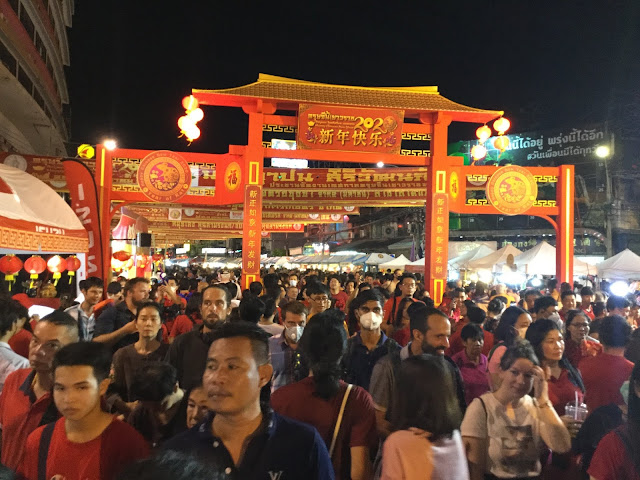 On my way to the metro stop a the Hualamphong train station I saw the Wat Trimit lit up and was able to climb up to view the crowds below and get in to see the Golden Buddha. 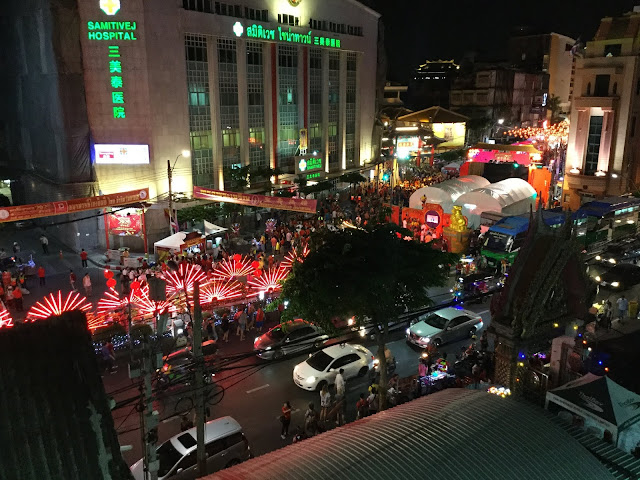 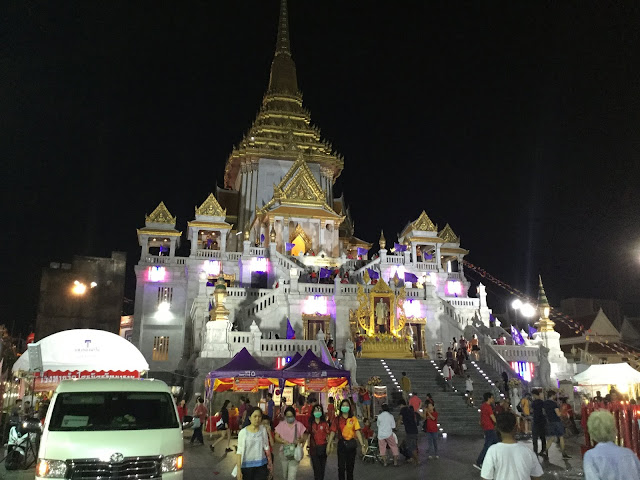 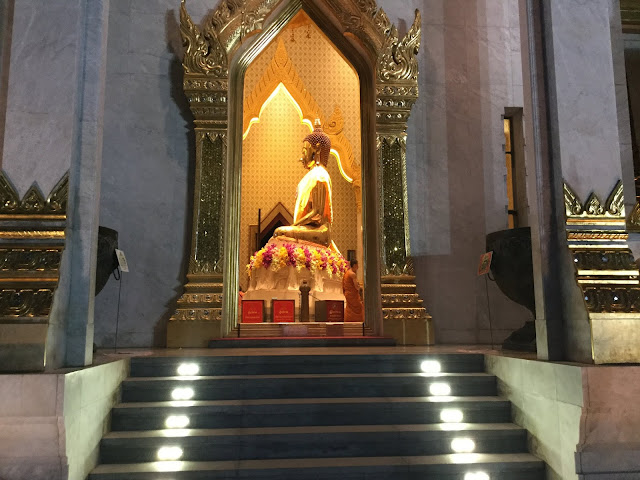 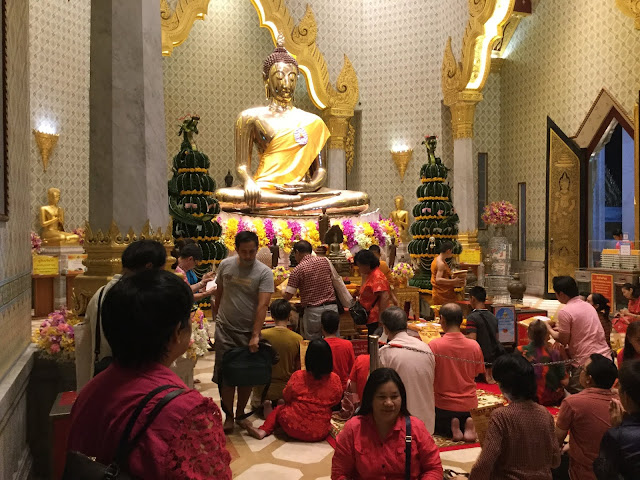 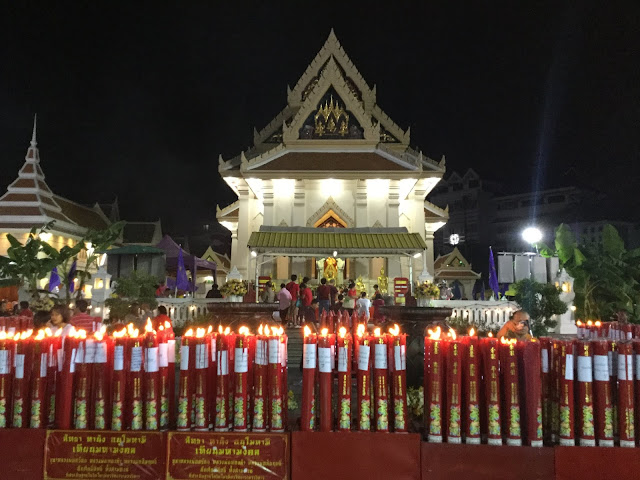 The following day I visited the weekend market where I was looking for a new side bag that I wanted to buy right before I return from my trip.  While there I was able to locate a fellow who was able to repair my old side bag. 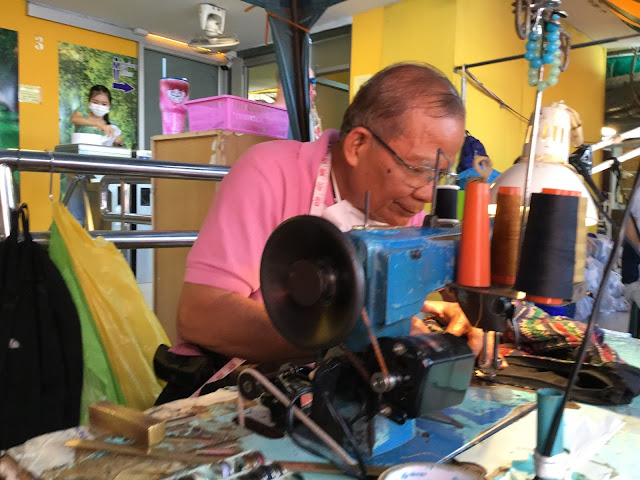 I then headed to the food court area for a cheap lunch of cashew nut chicken and rice along with some Thai Iced coffee. 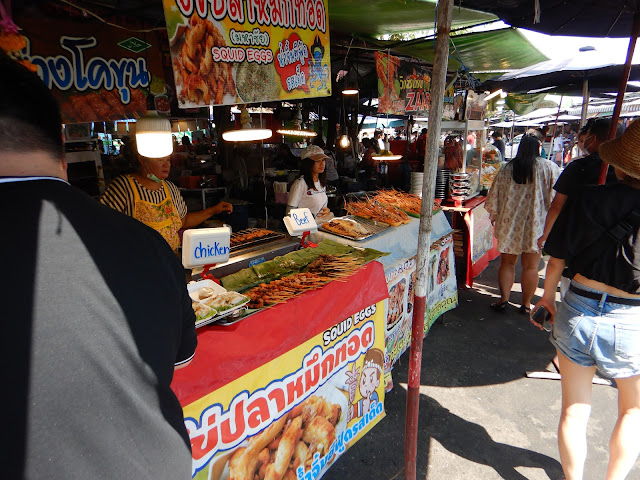 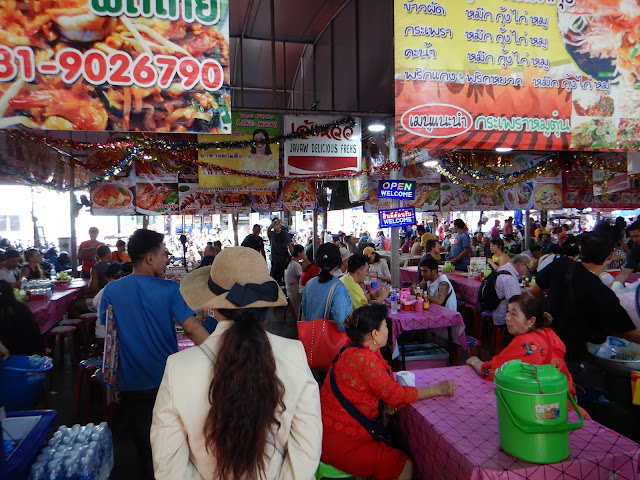 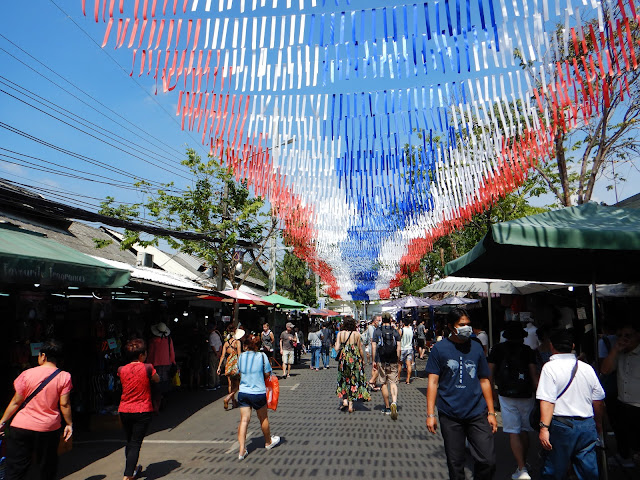 I then took the MRT subway to the Hualamphong stop for a short walk to Chinatown to view the final day of the Chinese New Year celebration.  The trains were all filled up with many wearing face masks. 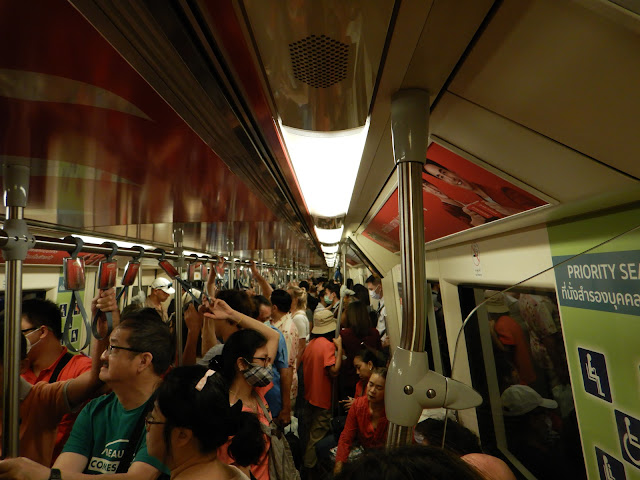 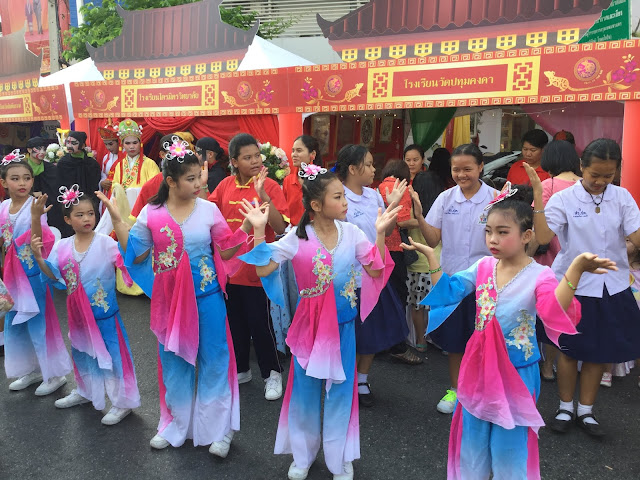 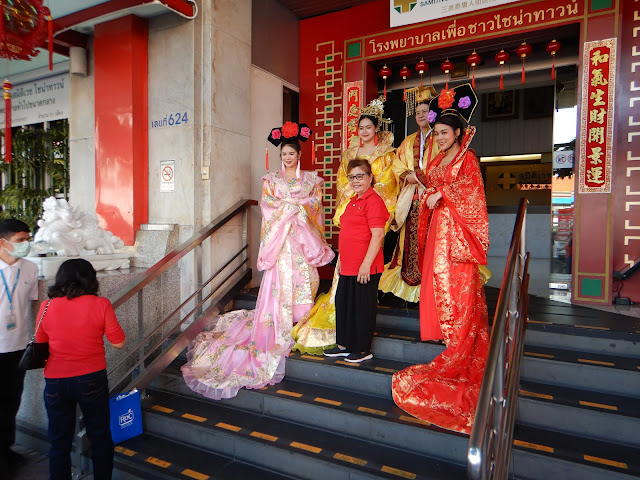 I watch amazing performances of two pair of Lion Dragons dancing on small elevated platforms and then returned by ferry boat and Sky train. 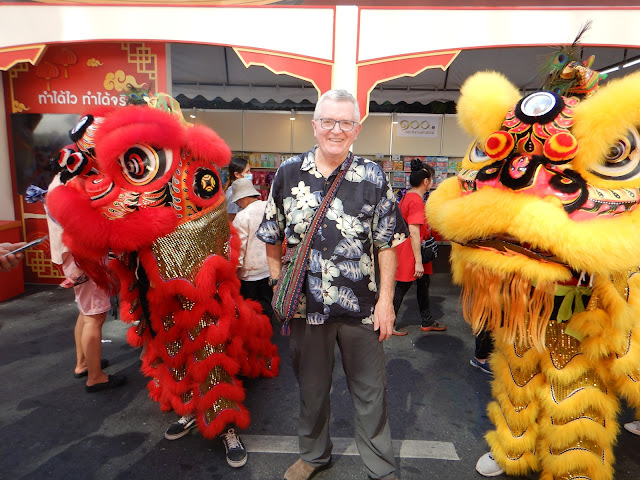 View of a long tail boat cruising the river. 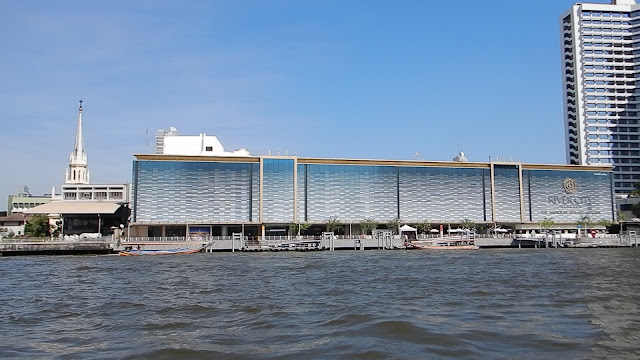